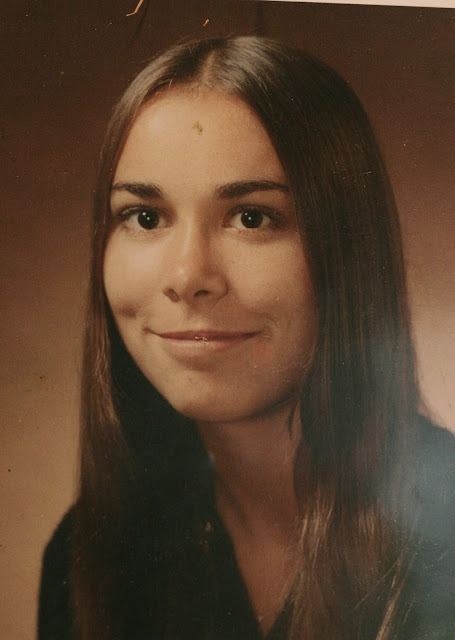 I think I need to start with a visual.

It's 1975.....Picture a girl, 20 years old, with long brown hair parted in the middle.  She likes to wear clothes from the thrift store, long velvet skirts, and, when she's feeling bold (which is often) the gray wool cape that an admirer gave her, lined with red.   She often carries an autoharp as she walks across town to her job at a Montessori school.  She likes to think she carries it because she loves music and wants to be able to sit in a park on her way home and play-----but I think there's more theater involved than true passion.  She is pleased with herself that she has found a little apartment of her own, that she's been able to move out of her parents' home, that she is independent.  No need for a car----she has her bicycle, and her feet.  Sometimes she takes her shoes off as she walks home and knots the laces so she can sling them over her shoulder and make a picture for people passing by of how free she is.  I think she thinks a lot about what people think when they see her.  Which is funny, since I don't think she has any idea.  Any idea of what they actually see.  And I think she would be very surprised at what they found actually attractive.

This girl has a best friend, Donna----they meet almost every day and spend hours drinking coffee and talking.  I wonder what they are saying to each other?  It's very compelling for both of them----I think sometimes they touch on something below the surface, something indescribable.  Maybe that's why they talk so much----they keep hoping they'll get a hint of that indescribable thing again.  When Donna was 18 and this girl (let's call her Susan) was 19, they both got "saved" in an emotional, charismatic home church group.  There were mostly young people there, and a visiting preacher.  Susan found herself breaking down in tears when the preacher told her she had a lot of love to share.  She certainly felt saved!  She and Donna celebrated later by going to the beach and wading into the water together, a kind of baptism, I suppose.  But a couple of months later, in a similar home setting,  another visiting preacher singled Susan out with a message for her.......he wanted to lay hands on her and pray for her.   Susan didn't feel any need for prayer, particularly......but she stood up, and the man prayed earnestly and powerfully about......whatever it was, and then pushed her forehead in such a way that it looked like she was being knocked over by the Spirit.  But Susan knew that he pushed her,  He pushed her!  It wasn't the Holy Spirit at all!   She walked away in disgust from  Christianity.  Obviously it was a sham.

One day, many months later, Susan confesses to Donna that she has no idea why she's even here on earth.  What does it all mean?  Who is God----is there one, really?   She feels so.....empty.   She's only twenty.....isn't this supposed to be when your life is all ahead of you, and you have hopes and dreams?  Why does she feel so directionless?

That's where this story starts.